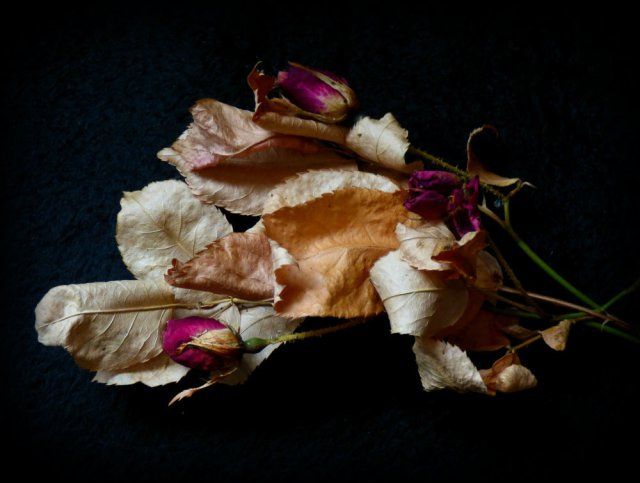 Rebecca stepped onto the front porch and froze when she saw the obstacle in her path. She knew what it meant, what they represented, and her heart began to pound. The song was next. It came at her from behind, in her own damn house, the haunting melody pulsing into her very core as her legs gave out and she dropped to her knees.

Her gaze fell on the roses and she thought of Matt, of the shriveled, decaying dream she once had; now as dried up as the flowers and their crumbling leaves. She watched them tear apart and flutter in the breeze, taking the last of her broken memories. He had finally come for her, and this time he intended to end it. Why else would he leave the real thing, the symbol of their dying love, if not to complete the cycle – as she had hoped he would.

Rebecca’s hand shot out, but hovered inches from the bouquet. In her mind the colour was a luscious, vibrant red. She had been so happy the day Matt gave them to her; young and innocent and in love. It didn’t last. The bloom fell from the relationship well before the flowers withered and lost their glow. She hadn’t known about Matt’s illness then, hadn’t expected he could hurt her.

“May I have the honour of this dance?”

Rebecca felt the breath catch in her throat. It was time. She had known he was there, in her house; toying with her. He had always been good at that, at finding weakness and exploiting it. “I think I’ll pass.” Her throat sounded scratchy, and for some reason she thought of the thorns.

“Don’t be like that,” Matt said from the doorway. He was using his quiet voice, his scary quiet voice, and yet she felt no fear. Not this time.

“You were the first man to give me flowers. The only man.” She turned towards him. “You’ll also be the last.” Rebecca stood, her legs unsteady. Not her thoughts, though. No, her mind was focused for the first time in months. The waiting was always the hardest. “It’s time to finish this. I’m done.”

“We’ll never be done,” Matt said, stepping forward. “You belong to me.”

Without taking her eyes from him, Rebecca crouched to retrieve the roses. There was no hesitation this time. She crushed them in her hand, and felt a slight scratch across her palm. Matt moved, eyes glittering, and the moment he stepped out onto the porch she slapped her hand against the floor.

The spell snapped into place immediately. Rebecca felt it buzz along her skin. It hurt, but she could deal with a little pain; she’d endured worse from Matt.

With her eyes still on his, she moved back so she was on the edge of the porch. He tried to follow her, but he couldn’t move. She saw the moment he realised what she’d done, and the satisfaction was like a hit of vodka; it went straight to her head.

“I never wanted this,” she told him. “But you gave me no choice.”

“Your juvenile spell can’t hold me forever.” Matt’s body began to vibrate with rage, and she knew he was fighting the hold.

“It doesn’t need to, because it’s already done.” Taking a deep breath, Rebecca placed her hands on the side of the porch and took a deep breath. “I’m taking away your power. Literally. And you will never be able to hurt me again.”

Energy shot through her, the impact taking her off her feet. Her chest burned, a white hot pain that she knew was a brand in her soul as well as her skin. On unsteady legs, she regained her feet. Matt was lying in the exact spot he had placed the roses, his skin pale, his eyes brimming with fear.

“What have you done?”

She walked to stand over him, pulling at the neck of her jumper so he could see the representation of her freedom, a talisman scored into her flesh. “What you intended to do. I broke the cycle and I’m letting go of the past.”

Matt screamed, a loud, high pitched noise that drowned out the song still playing in the background. Music to her ears. She dropped her head back and stared at the trap she had carved into the ceiling. It had taken days, a drop in the ocean compared to the time she had waited for this very scene to play out.

When Matt’s scream became a low whine of defeat, Rebecca smiled and glanced down at her chest. The roses were hers now, and they would not wither or die; they did not instill her with fear. They gave her strength, and protection. The best gift of all. “Thank you for the flowers,” she said, and walked back into the house.