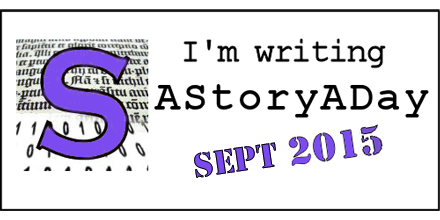 This is the final day of the Story A Day Challenge for September. Thanks for all your patience – there have been a lot of stories this month! I’ll leave you with part two of the story I began yesterday. A story from two different perspectives – that of father and son. I hope you enjoy.

Monty Fielding watched his son’s small frame pound against the glass of his bedroom window. For a moment he feared his boy would come exploding through the pane. Cursing, he rushed back into the house and took the stairs two at a time. He knew Michael couldn’t appreciate that Doug Jefferson was probably responding to an emergency at the hospital. During an episode, what he needed was routine and discipline. They were the only things Michael could accept.

With a heavy heart, Monty pushed into his son’s room. He was the only person who could reach Michael now. It wouldn’t be easy, but he had to try. When he caught sight of Michael, he froze in his tracks. He was rocking to and fro on the small window seat; Abigail beside him, wringing her hands in despair.

“Look at me Michael,” Monty said, crouching beside him.

The authority in his voice seemed to do the trick, because Michael met his eyes. Briefly. “Mrs Jacobs?” was all he said.

Monty frowned, wondering how to respond. There was concern in Michael’s voice, but there was something more. An eerie kind of knowing. He stood to peer out onto the street, and was surprised to see the green VW beetle still parked in the drive. Sandra Jacobs ran her own business, and she hadn’t missed a day of work in over three years.

Everyone’s entitled to a sick day.

The thought gave him pause. Sandra was a tough old bird, long past retiring age, but she had a strength of will; a stubbornness which meant nothing could keep her down. Michael was right about that. She was always the first to leave, and she would have called him if something was wrong.

Monty squinted, a tingle running down his spine when he saw that her curtains were still closed. Sandra had caught a bout of pneumonia the year before, and still made sure her curtains and door were open so the neighbours were free to call in.

“I need to go check on something,” he said to Abigail, turning from the window.

“Sandra’s car is still in the drive. It might be nothing, but…”

Abigail nodded, and then sat beside their son. She didn’t touch him, not yet. But Monty knew the worst was over. They had been lucky this time.

As he crossed the small street, Monty hated the ominous feeling that settled in the pit of his stomach. It made him shiver and, irrational or not, he couldn’t shake it. He knocked brusquely when he reached the house, and jiggled the doorknob. It was locked.

He tried calling through the letterbox, but got no response. Feeling foolish now, Monty walked around the side of the house. He let out a relieved breath when he discovered the curtains in the dining room had been drawn back. That was until he saw Sandra through the patio window and his blood froze in his veins.

She was laying on the floor, the phone next to her outstretched hand, and her face obscured by her silvery mane of hair. He didn’t stop to think then, he whirled and grabbed the first thing to hand – a garden chair. Monty swung it at the glass, jolting as the glass exploded.

Stepping through the debris, he walked directly to Sandra and bent to feel for a pulse. His breath came out in a rush when he detected the faint rhythm. “Hang on, Sandy,” he whispered as he grabbed the phone and dialled.

A few minutes later he gently moved her into the recovery position, and sat on the floor, his hand in hers, waiting for the ambulance to arrive. As he did, he began to talk. He told her about his morning, about rising early and upsetting his family’s routine. About the odd feeling he couldn’t shake, even though he’d told his son everything was going to be okay. Monty told her about Michael, and how he had been able to communicate his fear for Sandra in just a few words. And only then did it hit him how calm Michael had been as he left the house. How he had found a way out of the nightmare all on his own.

When the ambulance arrived, he allowed the paramedics to take over. They reassured Monty that Sandra’s pulse was steady and strong. What they didn’t communicate, not in so many words, was that he had gotten to her just in time.

He waited until they had loaded her into the ambulance, and then walked back across the street toward home. It surprised him when he saw Michael staring out into the street. Their eyes met briefly through the glass, and his son’s gaze was sure and strong. For the first time in a long time, Monty was grateful that their lives were a little less ordinary than most.