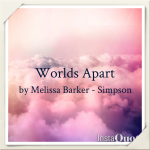 As promised, I’ve added a ‘sneak preview’ of Worlds Apart below. I’ve given the novel its own page too, and as I enter the wonderful world of editing (see how optimistic I’m being) I’ll post any updates.

I’ve also added another novel – Hands of Evil. This is a sequel to Sins of the Father, and is another journey into the lives of Morgan and Fairchild. I’ve included a synopsis and preview to that page too. It’s actually in the final stages of editing, and should be available from February 2014.

The Watchers were so named for their ability to observe and detect. Nobody knew how old they were, just that they were part of the very fabric of time.

They resided within the Hub; a cross-roads of sorts, and the centre of a dimensional structure that was theirs to protect.

Though they were one being, they presented as four; each part responsible for a strand of the multi-layered continuum. Its shape a quadruple helix – a chain to link all worlds as one.

The structure of the Hub was a living, breathing part of the whole. It fluctuated, evolved, and had the ability to regenerate the system from within.

The Watchers could draw energy from around and within them to manipulate their view. To anyone else the effect was a matrix of light and sound, like they were in the middle of a storm.

They didn’t see things in a linear way. Everything happened simultaneously, and when it happened in one of their dimensions they knew it.

Communication took part on a subconscious level, so subtle it was impossible to determine how they were doing it. They were just in your head, placing knowledge and understanding as though it had always been.

They weren’t transient beings, but neither were they constant. They chose others to reign over chaos, allowing a select few the privilege of command.
That command formed the Governance – a group who enforced the law and granted autonomy to each separate universe, providing they followed the rules.

Those realities, or alternative existences were not meant to collide. With such knowledge came a hunger for power and dominance, a power not even the Watchers could easily control. Yet there was an innate need for freedom, for fluidity in the very matrix itself, and so travelers were born to create balance.

The means and ability of travel was as varied as the world’s themselves. Though not predetermined, given the nature of an ever-changing system, indicators came into existence the moment a world was born.

Some travellers required a key, a tool to allow them to pass from one dimension to another. Others roamed only through their subconscious, leaving their physical form temporarily to share the reality of a new host.

Then there were those who could integrate, those who could travel body and mind wherever they chose. Only one world produced such beings, and only they could reach the Hub. For the chosen, an authority was formed; a group of interdimensional officers of the law – IDOLS.

Using the Hub as a base, the authority ran investigations, coordinated manoeuvres and offered protection to every life form in the continuum.

To become an IDOL they first had to take part in a test; an audience with the Watchers. There was no training manual to read, no years spent gaining the necessary experience. If they had the cognitive ability, the emotional intelligence and the desire to serve, they were given all the knowledge they required to fulfil the role.

The structures they built within the Hub were designed to accommodate a large number of people. An observation bridge was erected, a sanctuary at the very top of the dome. It connected to a device which stored and recorded the endless stream of information pulsing along the outer layer of the Hub. Every world, and every being within that world was mapped.

To bring order, and communicate a shared understanding, each strand of the continuum was named. This name was influenced by the shape it represented within the Hub.

The first pattern resembled a trident, the others a talon, sceptre and aegis. A code therefore evolved so observers could refer to the originating world.
They were responsible for one hundred and sixty territories. Some were well established dimensions, others vacant, and yet more that were in their infancy. When one reality died, a new one emerged, or it didn’t. The system was an ever changing thing.

These territories were numbered, and used within the coding system. TR-24 referred to Trident’s twenty-fourth territory. Until recently it had been dead space, so dark the Watchers couldn’t remember seeing life of any kind.

All that had changed, and it wasn’t the only thing to capture their attention. None of its inhabitants could travel. Even those born with the ability in alternative existences were dormant on TR-24.

They knew the cause of such an anomaly, and that an even greater change was coming. All they could do was watch; watch, wait and put trust in those who held the power.

I hope you enjoyed it. Feel free to feedback, if you wish.

Thanks for reading
Until next time
Mel